LIC Aadhaar Shila Plan (Plan No: 944) is a non-linked insurance plan, with profits and regular premium paying endowment plan. This plan is a combination plan which offers both savings as well as protection.

LICs Aadhaar Shila Plan is primarily for female policyholders having Aadhaar cards provided by UIDAI (Unique Identification Authority of India). This is a Loyalty Addition based plan and does not require any medical tests. 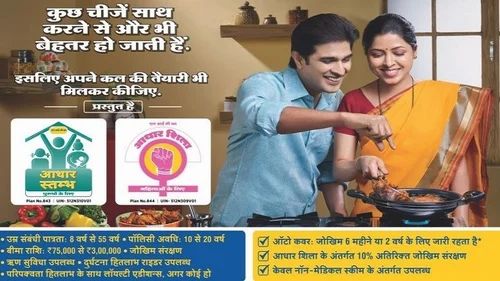 This plan also provides financial assistance to the policyholder’s family in the event of his/her miserable death even during maturity period and if the policyholder survives the policy term a fixed sum assured is paid at the time of maturity.

During and after the expiry of Auto Cover Period under a paid-up policy:

Death benefit will be paid after deduction of

After the expiry of Auto Cover Period under a paid-up policy:

The Sum Assured on Death under a paid-up policy will be equated to such an amount called “ Death Paid-up Sum Assured” which will be payable to Life Assured surviving till the end of the policy term.

Date of Commencement of Risk

Under this plan, the risk will commence immediately from the date of inception of the policy. The date of commencement of risk also includes minor lives of the family i.e. children. This is an add-on perk offered by the plan that makes it more efficient and beneficial for a secure future of the family.

Premium under this policy can be paid in intervals in the form of yearly, half-yearly, quarterly and monthly, where monthly premium can only be through NACH or salary deduction during the term of the policy. A grace period of one month but not less than 30 days is allowed for payment of yearly or half-yearly or quarterly premiums and 15 days for monthly premiums.

A revival period of 2 years is given to the assured from the date of first unpaid premium but before the date of maturity. This happens when the policy gets lapsed if the premium is not paid by the end of the grace period. The policy can be revived by paying all due premium along with interest at such rate as fixed by the Corporation at the time of the payment, subject to the submission of satisfactory evidence of continued insurability.

All the benefits under the policy will cease after the expiry of the grace period and nothing will be paid if the premiums have not been paid for at least 3 years. In case of premiums fully paid for 3 years and any subsequent premium is not duly paid, then the policy won’t be ceased but continued as a paid-up policy. Although, Auto Cover Period will be applicable under the plan.